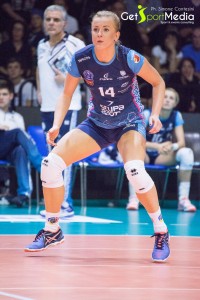 The setter of Polish NT and Chemik Police, Joanna Wo?osz is the new ambassador of ASICS Poland!. She joined the elite group of athletes supported by the Japanese manufacturer. Wo?osz involved with ASICS to the end of this year.

Joanna Wo?osz, born April 7, 1990 in Elblag, according to official statistics, is currently the best setter of the regular season in the Orlen League. About her decision to start cooperation with ASICS commented as follows:

“I’m really honored to collaborate with ASICS, and being an ambassador, for me  is a great pride. Since I can remember, ASICS products were with me from the very beginning of my career. On the floor I feel confident with my shoes, so I am able to stay concentrate only on the game. This oportunity to work with one of the most recognized sport company in the world with such a rich tradition, is for me a source of pride and at the same time a huge motivation to work always harder”.

Wo?osz is involved with ASICS for the year 2016 and she joined the elite group of volleyball players supported by ASICS. Among them: Pawe? Zagumny, Fabian Drzyzga, Marcin Mo?d?onek oraz Karol K?os.

The Turkish Showdown Approaching in Europe